Germany’s defense minister has announced her resignation, sparking fresh uncertainty for Europe’s most populous nation as it faces critical decisions about its response to Russia’s invasion of Ukraine.

Christine Lambrecht, who has faced sharp criticism for her handling of defense policy as well as a series of gaffes, said the “months of media focus” on her left no room for factual discussion about Germany’s military and national security policy.

She said she asked Chancellor Olaf Scholz for permission to resign.

Lambrecht, 57, was tasked with playing a key role in overseeing the “sea change” in Germany’s approach to defense and security that Scholz promised in the days after Vladimir Putin’s invasion.

But it has faced attacks over the slow pace of reforms of the Bundeswehr – the federal army – and attempts to upgrade its equipment.

Lambrecht experienced international ridicule shortly after the start of the war in Ukraine, when she was asked if Germany would provide military aid and replied that it would send 5,000 helmets to Kiev.

Calls for her to step down grew after a New Year’s Eve video message referring to the war in Ukraine as fireworks exploded in the background. In that video, Lambrecht said she associated the conflict with “many special impressions, many encounters with interesting, great people.”

Her resignation, which has been expected for days, comes as Berlin faces a looming decision on whether to send German-made Leopard 2 tanks to Ukraine — and whether or not to allow other European nations to do so.

Lambrecht was due to meet her American counterpart Lloyd Austin on Thursday ahead of a meeting of international supporters of Kyiv at the US Ramstein Air Base in western Germany the following day.

The office did not immediately announce her successor, but possible candidates include Eva Hogl, the parliamentary commissioner for the armed forces who has documented the plight of the German military. 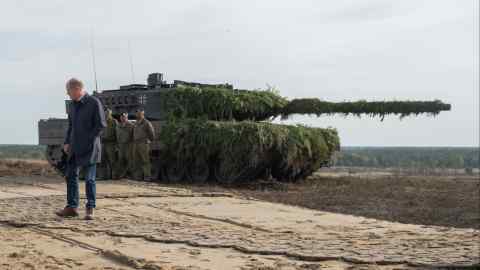 Hogle used the newspaper interview Frankfurter Allgemeine Sonntagszeitung on Sunday to call for the chancellor’s pledge of an additional €100 billion in Bundeswehr funding to be tripled to €300 billion. She, however, expressed caution about sending Leopard 2 tanks to Ukraine, warning: “You have to weigh whether the Bundeswehr can really do without them.”

Siemtje Moller, the junior defense minister, has been touted as another possible candidate.

Lars Klingbeil, the leader of Lambrecht’s Social Democratic Party (SPD), comes from a family of soldiers and is seen as someone who can smooth relations with the armed forces.

The German media included Wolfgang Schmidt, the chancellor’s chief of staff, and Hubertus Heil, the labor minister, among the runners and riders.

But the election of Klingbeil or Schmidt would upset the gender balance and become a potential problem for Scholz, who has pledged to have an equal number of male and female ministers in his cabinet.

Kristian Hoffmann, Scholz’s spokeswoman, said that it is “important” for Scholz to maintain gender parity in the cabinet. The chancellor “respects” Lambrecht’s decision and thanks her for the “good job” she did in difficult times, Hoffmann said.

Scholtz said Monday that he would act quickly to announce a replacement. He said: “I have a clear idea – and it will become known very soon – how this should go. Ukraine war: Vladimir Putin says deal may be needed to end conflict as he admits mistakes were made on mobilization | World News